Ever wondered how much confetti is dropped during one of the global traditions of New Year's Eve?

According to the official Times Square New Year's Eve site, more than a ton (that's 2000 lbs. or 907.18474 kg) of confetti is released.
What about the history of the ball that is dropped?
The Ball (yes, it's capitalized) has a diameter of 12 ft, weighs 11,875 lbs, and is in the shape of a geodesic sphere (similar to the large "golf ball" or Spaceship Earth at Disney's Epcot). The current ball was dedicated in 2008 and was intended to remain 400 ft above Times Square throughout the year, thus requiring it to withstand high winds, precipitaiton, and temperature fluctuations.
For 2011, The Ball is lit up with 32,256 LEDs (light emitting diodes) on 672 LED modules, all made by Philips Luxeon Rebel. There are 8,064 LEDs of each color: red, blue, green, and white. When mixed, a palette of more than 16 million colors and billions of patterns can be formed.
Each triangle shape on the geodesic sphere has a different design:

The Ball was first dropped in 1907 and has been dropped from the top of One Times Square every year since, except 1942 and 1943 (due to wartime "dimout" of lights in NYC).

The first New Year's Eve ball was made of iron and wood with a 5 ft diameter and a weight of 700 lbs. Unlike our current ball, there were only 100 25-watt light bulbs. In 1955, the iron ball was replaced with an aluminum ball weighing in at 200 lbs and remained in use until the 1980s. From 1981-1988, the ball was replaced by an apple (red light bulbs and a green stem) for the "I Love New York" marketing campaign. After that, the traditional white light-bulbs Ball returned. From 1995 to 1998, the Ball was "upgraded" with " aluminum skin, rhinestones, strobes, and computer controls".
Between 2000 and 2008, The Ball was a smaller version of the current ball: six feet in diameter and a weight of only about 1,070 lbs. After its retirement, this Ball remains the property of the building owners of One Times Square.
Sources:
The official Times Square New Year's Eve site
Chronicled by Little Star at 3:48 PM No comments:

1901 - The First Nobel Prizes are Introduced

The first of the posts containing information contributed by my friends (any information they contribute will appear in green and indented). Sometimes, I may also add information that I dug up before reading what my friends wrote. This one happens to be a social/cultural post from Caleigh Y.


The Nobel Prizes, established by Alfred Nobel (see Alfred Nobel, Dictionary Terms label), were first awarded on December 10, 1901 in Stockholm, Sweden and Christiania (now Oslo), Norway. At first, there were only five prizes awarded in Physics, Medicine/Physiology, Literature, Chemistry and Peace. Later, a prize in Economics was added. The Nobel Prizes have honored many of the world’s leaders, and are considered the highest honor a person can receive. They are significant because they honor some of humanity’s highest achievements as well as highlighting society’s progress.

If you're interested in learning more about the Nobel Prizes, prize recipients, or the medals, visit the official Nobel Prize website.
Chronicled by Little Star at 8:10 PM No comments:

Another contribution from Caleigh (all guest bloggers' work is in the green font):

Alfred Nobel was born on October 21, 1833 in Stockholm, Sweden. His most notable accomplishment is that he invented dynamite after conducting experiments with nitroglycerine. In his will, he gave his money to starting a foundation which would give prizes to individuals or group who demonstrated achievement sin Chemistry, Medicine/Physiology, Physics, Peace, and Literature. These prizes became known as the Nobel Prizes and are the highest awards a person can receive.

Recently, in an attempt to increase young people's interest in science, technology, engineering, and mathematics (STEM), the Life Technologies Foundation sponsored a Lunch with a Laureate program in the United States. This program was created as part of the lead-up to the first USA Science and Engineering Festival. High school students are able to host a Nobel laureate (winner of a Nobel Prize) on campus during a question and answer session.
Without Alfred Nobel, laureates such as Harold Varmus (Nobel Prize in Physiology or Medicine, 1989) or President Barack Obama (Nobel Peace Prize, 2009) wouldn't have been recognized for their work.
Chronicled by Little Star at 8:09 PM No comments:

All right everyone, here's the (drumroll) first of the 20th century timeline posts that have been a long time coming. Thankfully, they're all formatted now and so I'll be able to just publish them rather than type them all up. Without further ado...
*NOTE: THIS POST CONTAINS CHINESE TEXT - Without proper rendering support, you may see question marks, boxes, or other symbols instead of Chinese characters.


The Boxer Rebellion took place in China during the Qing Dynasty (also called Manchu Dynasty and the last ruling dynasty of China) between the Righteous Fists of Harmony (義和團, called the "Boxers" by the foreigners) and the Dowager Empress Cixi (see Cixi, Dictionary label) against the allied foreign powers (listed in order of amount of assistance): Japan, Russia, Great Britain, France, United States, Germany, Italy, and Austria-Hungary. 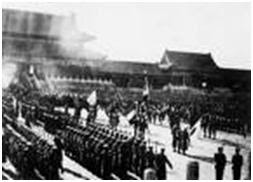 The Boxer Rebellion was the outbreak of resentment against the influx of foreigners, especially missionaries, whom the Boxers felt were disrupting Chinese culture. Their slogan was 扶清灭洋 or "Support the Qing, destroy the Foreign". The peak of the rebellion took place in Beijing (北京,then Peking). About 3,000 foreigners and Chinese Christians were held hostage by the Boxers for about 55 days.

Following the rescue of the hostages by the allied international forces, China was forced to endure the demands of the Boxer Protocol, an agreement Empress Cixi was forced to sign that allowed foreign powers to remain in the capital and be treated as honored guests. These ambassadors were viewed as nothing but spies and a deep resentment sunk into the population.

In addition, the Boxer Protocol forced China to sink many thousands of dollars in debt due to wartime reparations, the traditional Chinese education system was replaced by a Westernized system of education, and it marked the end of dynastical rule. Japan’s role in subduing the rebellion made it a good ally in the foreign powers’ eyes and her influence grew in eastern Asia.
Chronicled by Little Star at 8:01 PM No comments:

Empress Dowager Cixi (慈禧太后) was one of the last of the Manchu (滿族) rulers in China and the last Dowager Empress. Contrary to tradition and policy, Cixi took over as empress, and had enormous influence and power – possibly more than Queen Victoria of England.

She was a minor concubine of emperor Xianfeng and became the mother of his only son, Tongzhi. Following the emperor’s death, Cixi and the late emperor’s senior wife, Ci’an, became his regents. In 1875, two years after Tongzhi came of age, he was dead – and it was believed Cixi (his mother) was involved.

Cixi violated normal succession rules and named her nephew the emperor while she and Ci’an served as regents again. Ci’an died and left Cixi the only regent. After her nephew came to age, he implemented a series of reforms that would open China more to the foreigners.

Cixi was very opposed to foreigners and led a military coup to re-install her as regent. One year after becoming regent again, she supported the Boxer Rebellion, which was defeated, and Cixi was forced to accept the peace terms. She continued to rule with extremely diminished power until her death. It was rumored that she also ordered her nephew (still the emperor) to be poisoned as she died.
Chronicled by Little Star at 7:48 PM No comments:

What I read to keep myself sane